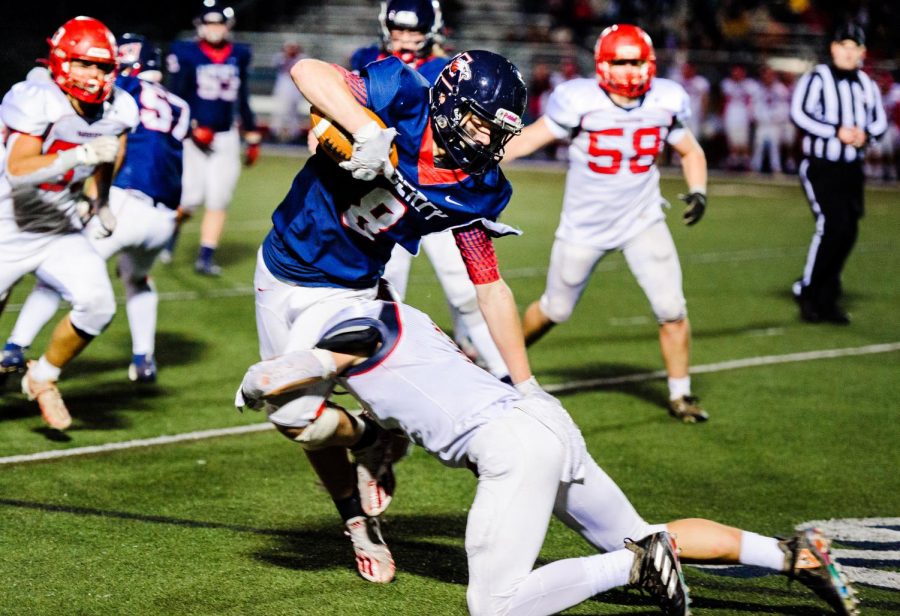 Senior running back Cody Owens carries the football in the game against the rival Falcons. Photo courtesy of Coy Ferrell of the Fauquier Times.

This year’s fall season of football ended with one of the strangest weeks in Liberty sports history.

The Eagle’s football team figuratively earned two victories: One earned from actually playing and defeating their county rival, the Fauquier Falcons and a default victory because FHS had to forfeit due to a scheduling issue. Officially the game was won before the game was played, but the triumph on the field made it a win-win night, as the Eagles officially ended their season 1-8.

What is normally considered the annual Bird Bowl was cancelled due to the forfeit and even though Eagles didn’t play for the trophy, the team still played extremely hard for the win.

The victory was earned by the score 24-20, concluding the season with their first win.

Considering the Bird Bowl is normally sponsored by the Fauquier Times, they named freshman quarterback Austin Mawyer MVP for the Eagles.

“It’s crazy since I’m a freshman but I have years to improve and possibly get it again,” said Mawyer.

After a timeout, Mawyer took the ball and surged forward for the game’s final play running out the clock. With all the amazing plays he provided it made him the Most Valuable Player.

“I tried in all the games, but for this one I worked extra hard to get the win so I’m very proud of the team,” said Mawyer. “With the past games, even though we lost it doesn’t mean we weren’t good.”

“For it being the most important game [against our rivals] we just really wanted to win,” said senior Colby Lewis.

With the desire to win, they had to put in team effort in this game to prove they could.

“We practiced extremely hard and wanted to prove that we were still good,” said Cody Owens.

Despite the amount of games they lost this season Buzzo had a lot of faith in the boys to win and is still very proud of them.

“I wasn’t nervous but overall I was relieved,” said coach Buzzo. “I’m proud of our victory.”

And while the night was full of  adventures, it was also Senior Night, and all Fall sports seniors were celebrated in a pregame ceremony.

“It was definitely sad that it’s my last time playing but I enjoyed every moment of it,” said Owens.

With a very emotional rollercoaster of an evening, the seniors got to end their football careers on a high.

“I feel happy because I get to reflect on all the good times I’ve had,” said Lewis.