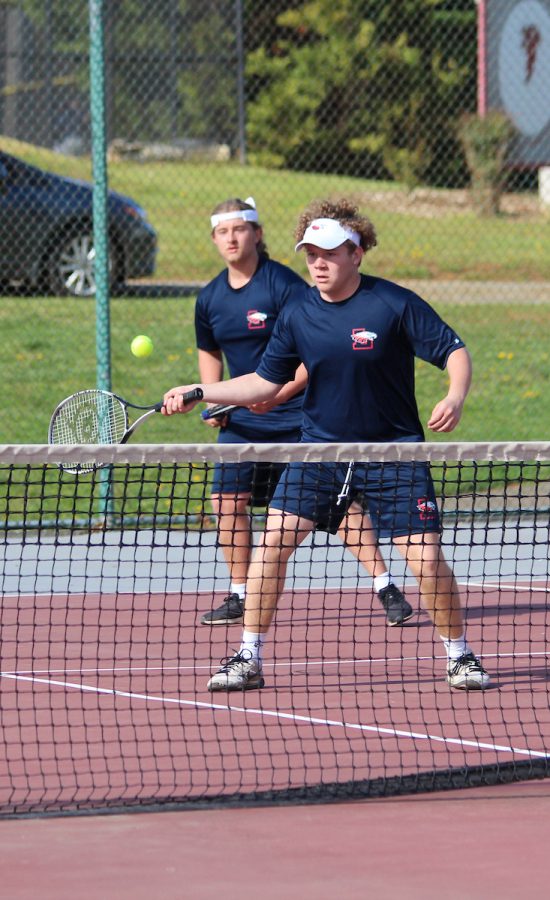 Jonathan Doores and Kenny Rodriguez participate as partners in their doubles match. Photo courtesy of the yearbook staff.

April is here, which means Liberty High School is in the midst of spring sports.

Since the LHS boys tennis team is still fairly new, it has been a season of learning the game and improvement.

“I feel like everybody’s improving slowly, like learning new skills since they have never played tennis before. Everybody’s getting the game quickly,” said sophomore Caden Rynestad.

The boys team has had to adapt to the changing team and the challenges of having a newer, less experienced team.

“The team has had to adapt against each team, as everyone’s different, everyone has their own advantages and disadvantages. So every match has a new plan to just go with it. And we’ve also had to show that just cause we’re less experienced compared to the other teams, that we’re not as bad as people may expect, but we have to prove that against every team we play,” said senior Luke McCaslin.

The team has also been able to learn from not just practice, but from their wins and losses as well.

“Seeing teams like Handley play, I think we all pick up one or two things up from them,” said Doores.

As the season is moving forward, the boys tennis team is hopeful and excited to see the rest of the season play out.

“Hopes for the team through the rest of the season would be to keep improving and don’t give up despite the losses. If we can win some more games and maybe even full matches, that would be cool. But expectations aren’t too high, so nothing to stress about,” said Luke McCaslin.

The team is very optimistic for the rest of the season and there are many matches in the coming weeks that fans can attend if they would like to show their support.